BLOG TOUR – With A Little Bit of Blood

With a Little Bit of Blood (The Eliza Doolittle & Henry Higgins Mysteries)
by D.E. Ireland 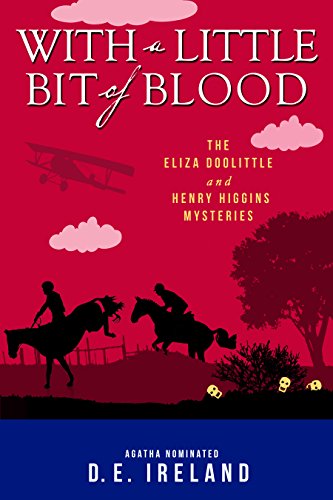 In the fourth book from the Agatha Award nominated writing team of D.E. Ireland, famous literary characters Eliza Doolittle and Henry Higgins find they may have brought trouble with them when they attend a country house party in With A Little Bit of Blood.

Eliza is not happy when Higgins buys a snazzy roadster. Her misgivings prove correct when he becomes injured in a motor car crash. Forced to play nursemaid, Eliza is thrilled to accept an invitation to a house party from Lord Ashmore and his bride, the former Clara Eynsford-Hill. But upon their arrival at Banfield Manor, Eliza is dismayed to see her sweetheart Freddy arm in arm with a beautiful actress. Higgins is shocked to learn the woman who once stalked him is also attending the party. Things grow even worse when spiritualist Madame Evangeline arrives and warns of impending danger. Her prediction comes true when someone is killed during the following day’s shoot in the forest.

Higgins and Eliza suspect it wasn’t an accident, but murder. Every guest hides a dark secret that involved the dead man. But who hated him more? The French aviator, the American cinema actress, a lady novelist, the Austrian count, or a knighted explorer of the Amazon? Madame Evangeline’s séance may reveal what is really going on. But her cryptic words deepen the mystery, especially after another guest turns up dead.

Who is behind these murders? And has Higgins himself been targeted? As the day of the fox hunt begins, it seems likely that more than the fox will die. Before that happens, Eliza and the Professor must discover who may have a little bit of blood on their hands.

D.E. Ireland is the pseudonym of long time friends and award-winning authors, Meg Mims and Sharon Pisacreta. In 2013 they decided to collaborate on a unique series based on George Bernard Shaw’s witty play Pygmalion, which also inspired the classic musical My Fair Lady. At work on Book Four of their Agatha nominated series, they also pursue separate writing careers. Currently, both of them write cozy mysteries for Kensington under their respective pen names: Sharon Farrow

with her Berry Basket series, and Meg Macy

with her Shamelessly Adorable Teddy Bear series. The two Michigan authors have patient husbands, brilliant daughters, and share a love of tea, books, and history.

December 7 – Cozy Up With Kathy – REVIEW

December 11 – Escape With Dollycas Into A Good Book – REVIEW

December 11 – Here’s How It Happened – SPOTLIGHT

2 thoughts on “BLOG TOUR – With A Little Bit of Blood”