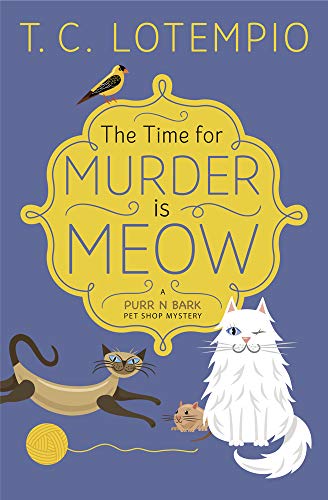 Crishell “Shell” McMillan sees the cancellation of her TV series as a blessing in disguise. The former actress can now take over her late aunt’s pet shop, the Purr N’ Bark, and do something she loves.

While getting the shop ready for re-opening, Shell is asked to loan her aunt’s Cary Grant posters to the local museum for an exhibit. She finds the prospect exciting—until a museum board member, who had a long-standing feud with Shell’s aunt, votes against it. When she discovers the board member dead in the museum, Shell becomes suspect number one. Can she, her Siamese cat Kahlua, and her new sidekick—her aunt’s Persian Purrday—find the real culprit, or will her latest career go up in kitty litter?

Cats and Cozies – a natural combination?  It is for this author.

Most of the mysteries on my bookshelf, I confess, are cozy mysteries.  For those of you who aren’t familiar with the genre, cozies are a subgenre of crime fiction where the crime and the detection takes place in a small town.  Remember the old Murder She Wrote series? That’s a good example of a cozy.  The detectives in such stories are nearly always amateurs (cue JB Fletcher) sometimes retired lawmen or women. The majority of the detectives are of the female persuasion, and often hold jobs that bring them into contact with the other residents of their town.  More often than not they’ll have a contact on the local police force who’ll help them out with a clue or two.

The killers aren’t usually hard boiled serial killer types, and once unmasked, are most often taken into custody with little or no violence. If there is violence, it happens off-screen…no grisly murder scenes depicted in any cozies! Foul language is also kept to a minimum.  The murders are generally members of or related to someone in the town wherein the murder occurs and the motives – greed, jealousy, revenge – often are deep rooted.

Cozies frequently revolve around a theme – for example, Diane Mott Davidson’s revolves around cooking, Parnell Hall’s around crossword puzzles, Monica Ferris’ needlework…you get the idea.  Animal lovers are also well represented, as well, which brings me to my cozy mystery series, debuting in December from Berkley Prime Crime…..think Jessica Fletcher with a cat and you’ve got it!

All my mystery series feature cats prominently.  Since I at one point in my life had four cats at one time, it’s no coincidence. They say that cats are often considered good ‘muses” by writers.  I happen to agree with that statement.

Take the Nick and Nora series.  Nora is Nora Charles, ex-crime reporter turned restaraunt entrepreneur.  She’s returned after a 12 year absence from reporting on crime in Chicago back to her hometown of Cruz, California, to take over her deceased mother’s sandwich shop.  Shortly thereafter, Nora finds a surprise waiting outside her door – a stocky, black and white cat.  She takes the cat in and names him Nick (after Nick Charles, the Thin Man, of course).  She later finds out that the cat did in fact belong to a PI, Nick Atkins, who is currently MIA – she also finds out that Nick has many talents, among them the ability to spell out words with Scrabble tiles – plus, he’s got a nose for scenting out crime.

The Cat Rescue series features Sydney (Syd) McCall, a former advertising executive who returns to her hometown to help her sister Katherine (Kat) run the local animal shelter.  One of the shelter cats, an orange tabby named Toby, ‘adopts’ her as his human….and of course, along the way, they get plunged into a mystery when the shop owner who was opposing the shelter is found dead, and Kat is suspect number one!

Their adventures continue in the second volume, DEATH BY A WHISKER.  This time it’s a shopping channel queen who’s murdered at her booksigning.  Toby the cat plays an integral part in helping Syd decipher the clues, although I confess not as large a part as Nick plays in the Nick and Nora mysteries.

My most recent entry is THE TIME FOR MURDER IS MEOW.  Shell McMillan is an actress whose show has just been cancelled; coincidentally, at the same time her aunt dies and leaves her her pet shop.  Shell ‘s excited about moving to Connecticut and running it…until she becomes the number one suspect in the murder of a woman who opposed her donating her aunt’s movie poster memorabiiia to the local museum.  And yes, there are cats who figure prominently in this series also.  Kahlua, Shell’s pedigreed Siamesee, and Purrday, her aunt’s one-eyed Persian whom she also inherited!  Purrday seems to have a better nose for mysteries than Kahlua, though. It’s Purrday who uncovers a major clue….but I’ll let you all find out for yourselves!  J

I hope you’ll join Nick and Nora, Syd and Toby and Shell and Purrday on some of their adventures, but even if a crime solving cat isn’t your cup of tea, I’m sure that there are many other cozies out there that are.  Sample the genre today – I think you’ll be very pleasantly surprised!

While Toni Lotempio does not commit – or solve – murders in real life, she has no trouble doing it on paper. Her lifelong love of mysteries began early on when she was introduced to her first Nancy Drew mystery at age 10 – The Secret in the Old Attic. She and her cat pen the Nick and Nora mystery series from Berkley Prime Crime and the Cat Rescue series from Crooked Lane. Her latest, the Pet Shop Mysteries, makes its debut August 8 with The Time for Murder is Meow.

Where to find them:

August 8 – Escape With Dollycas Into A Good Book – REVIEW