Welcome to my stop on the blog tour for The Dark Awakening by D.L. Blade! 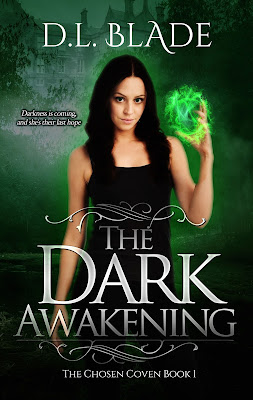 She’s stalked, hunted, and a villainous vampire desires her blood.
Mercy’s life is anything but ordinary. A stalker lurks in the shadows, and a man rescues her from a life-threatening car accident, but vanishes right before her eyes.
But this man who she thought was a hallucination, tracks her down at a nearby cove, and claims they were once in love from another time. Another century. Mercy has no memory of this world he shares, and instinctively doesn’t trust him.
He also reveals to her a life-changing secret—she’s a powerful witch, vampires are real, and she’s destined to destroy them.
Mercy finds herself dragged into a centuries-old battle against the undead, and a sadistic vampire leader has set his sights on her. And he will stop at nothing until he claims Mercy as his own.
She and her coven won’t go down without a fight. She needs to discover the truth about her past, and the power she holds, before it’s too late.

Buy on Amazon!
EXCERPT
They were there
in the shadows again. This was the third time this week I had thought someone
was watching me.

The last few
weeks, I’d heard the rustling of leaves and the crackling sound of old fallen
branches beneath someone’s feet, or the hairs at the back of my neck would
stand straight because I knew someone stood silently behind me. Last night
wasn’t any diﬀerent. I exited my car after an exhausting day at work and heard
what sounded like a low, deep exhale coming from the forest next to Lily’s
house. I swiftly turned around, fumbling with the ﬂashlight on my phone, but when
the light pierced the darkness, the sound stopped. 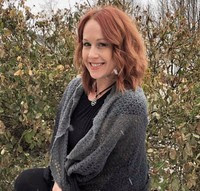 About the Author
D.L. Blade grew up in southern California, but relocated to Colorado with her family in 2014.She always loved writing, concentrating on poetry rather than prose when she was younger. That changed however, when she had a dream one night and decided to create a story about it.In her spare time, D.L. enjoys a wide variety of hobbies, including reading, and attending rock concerts. She also enjoys visiting animal sanctuaries and pet shelters. She hopes one day she will own enough land to start her own dog rescue.In the future, D.L. hopes that she can continue to write exciting novels that will captivate her readers and bring them into the worlds that she creates using her imagination.
Follow her on social media
www.dlbladebooks.com
www.facebook.com/dlblade
www.instagram.com/booksbydlblade
www.twitter.com/DLBlade_Writer