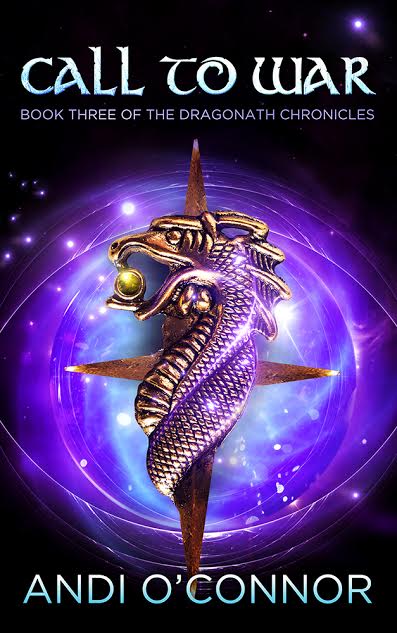 Title:
CALL TO WAR
Author: Andi O’Connor
Publisher: Purple Sun Press
Pages: 258
Genre: Fantasy
Blurb:
Darrak’s adventure concludes with this thrilling finale of The Dragonath Chronicles!  Following the betrayal of two of his trusted
companions and a devastating battle in Mystandia, Darrak’s talents are
desperately needed by the citizens of both Earth and Dragonath. Torn with the
decision of where his loyalty should remain, he finally decides to confide in
Andillrian. Together, they craft a plan they hope will save Darrak’s home
planet, but their optimism is short-lived.

The Hellborn’s army has begun the march to war.

With less than two weeks of preparation
remaining, their weaknesses become unavoidably apparent. Planning for defeat
suddenly becomes as important as planning for victory. Darrak’s insecurities
continue until the moment the first arrows begin to fly. He can only hope that
help from a few unlikely sources will be enough.

For if they fail, Dragonath will fall. 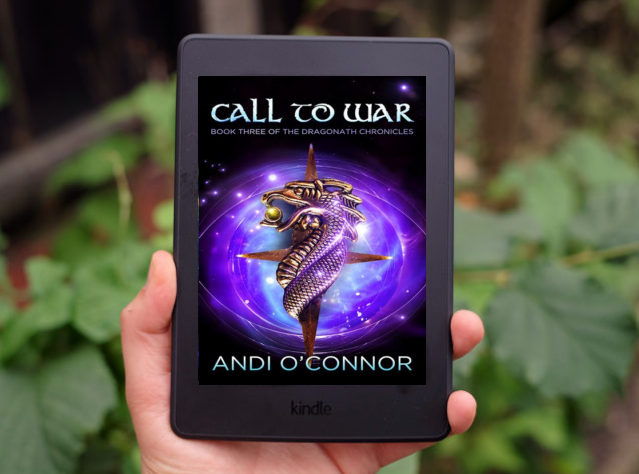 It was actually a fluke. I’ve always been a big reader with an overactive imagination, so one summer during college, I got an idea for a book and started writing for something fun to do. It took me nine years to finish, and once it was done, I decided I might as well try to get it published. Everything ballooned from there, and now, this is what I do full-time.

Fantasy, mostly epic/high although I have a series of short stories that’s dark fantasy.

I’ve always been a huge reader of Fantasy ever since I was a child. I loved that it was make-believe, yet still real. When I got the idea for my book, it naturally followed the genre that I read the most.

My first book, The Lost Heir, was published through a small press in 2013. I disliked the experience and the control I lost regarding the cover, editing, formatting, etc. I also quickly realized that even when going through a publisher, much of the marketing falls on the author themselves, so I decided that if I was going to do most of the work myself, I’d self-publish and retain control over the entire process. I created my own imprint and have released the rest of my titles since, hiring editors, cover artists, formatters, etc. I even re-released The Lost Heir once the contract with the other publisher ended and the rights reverted back to me.

That nothing in life is black and white. There is always another side to a story and a reason for people’s actions.

The most rewarding thing about writing is knowing that my work touches others and helps them through some of the most difficult times in their lives. For example, I had one woman tell me that she had cancer and certain scenes from Silevethiel helped get her through her chemotherapy sessions. While sitting there for hours during her treatments, she’d picture my elf city of Silverden, and it would help her lose herself and forget where she was and why she was there. Stories such as that touch my heart profoundly and are the most humbling and rewarding aspects of my career.

Managing my time between promotion, marketing, administration, traveling for personal appearances, and then actually writing, is one of the most challenging things about my career. Many people don’t realize how much work goes into being an author. It’s not just sitting down and writing. I would be amazing if that’s all it entailed! All of the hidden aspects are quite time-consuming, and being able to organize everything well is still something I struggle with.

Do your research and make all aspects of your book professional. Hire editors and cover designers. Distribute your book through various markets, not just Amazon. Research the best ways to market yourself and your book on social media and in person. Taking a shortcut in any of these areas will reflect poorly on you and will produce a subpar book.

I read mostly fantasy and science-fiction, though I do enjoy some mystery and suspense books every once in a while!

I have neon-green hair that glows under a black light, and a continually growing collection of tattoos! I just got my latest two in May: “Seize The Day” and “Maximum Effort.” I’m a total Deadpool fangirl and adore the new Ghostbusters (Holtzmann is by far my favorite!) I’m also an avid ballet dancer and go to class at least 3 or 4 times a week. 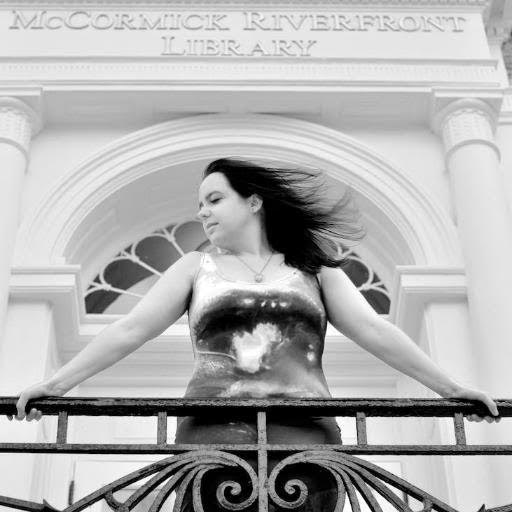 Andi O’Connor is the
award-winning author The Dragonath Chronicles, The Vaelinel Trilogy, and The
Legacy of Ilvania. She’s written multiple books, including the critically
acclaimed Silevethiel, which is the
2015 Best Indie Book Award winner for Science Fiction/Fantasy, and the 2015 New
Apple Official Selection for Young Adult. Silevethiel
was also named to Kirkus Reviews’ Best Books of 2013. Andi’s short story
collection, Redemption, is a 2014
Kindle Book Awards Semifinalist.You can frequently find Andi as a guest panelist at Comic Cons throughout the
country including the Rhode Island Comic Con, Philcon, Conclave, WizardWorld,
and Chessiecon. Andi also writes for Niume where she provides writing tips,
advice, and insight on her career as an author. You can connect with Andi onFacebook, Twitter, and Instagram. For more information, visit Andi’s website.

This tour is brought to you by 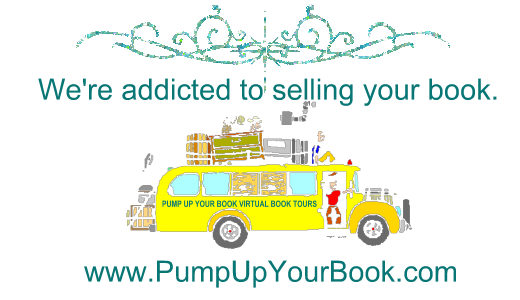