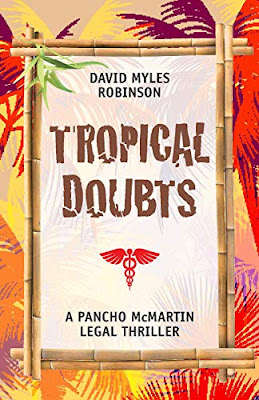 When Honolulu’s flamboyant and quirky attorney, Pancho McMartin,
agrees to step out of his normal role as a criminal defense lawyer, he
thinks it will be a challenging but welcome change from his daily dose
of criminal clients. His old friend and father-figure, Manny Delacruz,
has beseeched Pancho to handle a medical malpractice claim against the
physicians who botched what should have been a routine surgery, but
which resulted in Manny’s beloved wife being in a permanent vegetative
state. The case looks good, the damages enormous, but when Manny is
arrested for the murder of one of the doctors, Pancho finds himself back
in his old role. If Manny is convicted, it means he won’t be able to be
at his wife’s bedside to hold her hand, caress her face, and read his
poems to her. He will have lost his reason to live. The pressure on
Pancho is enormous. While he and his team try to make sense out of one
of the most sinister and complicated murder schemes he’s ever seen, the
medical malpractice case chugs forward, in jeopardy of being worthless
should Manny be convicted.

Other Books by David Myles Robinson:

CHAPTER 1 P ancho McMartin watched as his client, newly convicted of murder, was escorted to the side door of the courtroom by two men in brown jumpsuits with “Sheriff” stenciled across the back. The client, a large Samoan in his early twenties, had a shaved head. Except for his face, every square inch of visible flesh was tattooed.
With shackles on his wrists and ankles, he shuffled to the door and then stopped and glanced over his shoulder at Pancho. He’d sat through the trial with a look of absolute disdain, even menace, and now Pancho almost laughed out loud at the expression on the man’s face—fear. Pancho gave him a small nod, which he hoped would convey some sense of encouragement. Not that there was much to encourage. The Samoan would spend the rest of his life in prison unless Pancho could win an appeal of little or no merit.
His client disappeared through the door, and Pancho was alone in the courtroom. He shivered as the room, now empty, returned to its usual freezing temperature. He leaned his elbows on the counsel table and put his head in his hands. This was his third trial loss in a row, the second this year—a record for him. Pancho knew his client was guilty and hadn’t wanted to take the case. But the client’s family in Samoa and Oceanside, California, had collected the $250,000 fee Pancho charged for a murder case. Even then he might have turned the case down, but Pancho’s private investigator and best friend, Drew Tulafono, had asked him to take it on.
“The guy’s family in Oceanside goes to church with my mother,” Drew had said. “And they’re using all their powers of persuasion to get her to get me to get you to take the case.”
“Don’t they know he’s guilty as hell?” Pancho asked.
Drew nodded. “Pretty much, although they’re hoping he’ll get off with self-defense. But the main thing here is that Samoan families, mine included, are tight-knit and supportive of each other. If someone’s in trouble, the family’s sacred duty is to come to their aid in whatever way possible.”
So Pancho had taken the client on and had presented a decent case for self-defense. In the end, however, Pancho figured the jury just couldn’t get past the way his client looked, which was like a gangbanger who would just as soon kill you as step out of your way.
Pancho sighed heavily and ran his hand through his long brown hair. Three in a row. He wondered if he was losing his touch. He felt tired and depressed. It had been a bad six months. Just before he’d taken on this loser of a case, his longtime girlfriend, Paula Mizono, a financial adviser, had tearfully told him she was accepting a position in Hong Kong. She loved him, she said, but she was in the prime of her work life and this opportunity, at triple her current salary, was too hard to pass up. “Besides,” she said, almost as an afterthought, “even though I knew what I was getting into when we hooked up, the fact of the matter is we hardly see each other. I’m off to work at three in the morning because of the time change to New York, and I’m ready to hit the sack by the time you get home.”
Pancho had lost his first wife to the long hours of his law practice and had vowed not to lose Paula. It was her job that caused the split, he told himself. But the pain of the loss and the loneliness of his empty bed hurt just the same.
The door to the judge’s chambers opened and Lew, the bailiff, poked his head into the courtroom. “You all pau in here, Mr. McMartin? I need to lock up.”
Pancho nodded and stood. “Yes, Lew, I’m done. Put a fork in me.”
“For what it’s worth,” Lew said, walking into the courtroom and pulling his keys out of his pocket, “I thought you did a great job on a dead loser of a case.”
Pancho gave a wan smile. “Thanks.” He loosened his tie, picked up his briefcase, and walked out of courtroom into the real world. 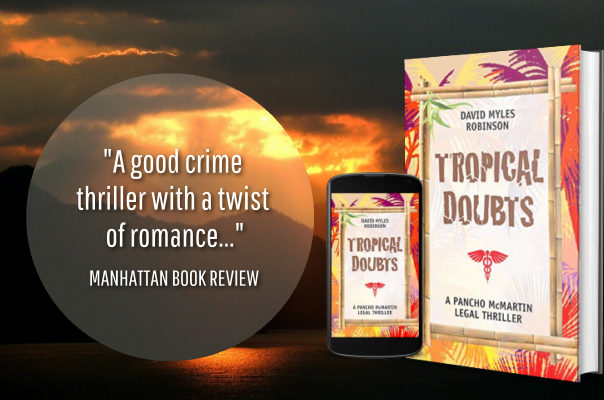 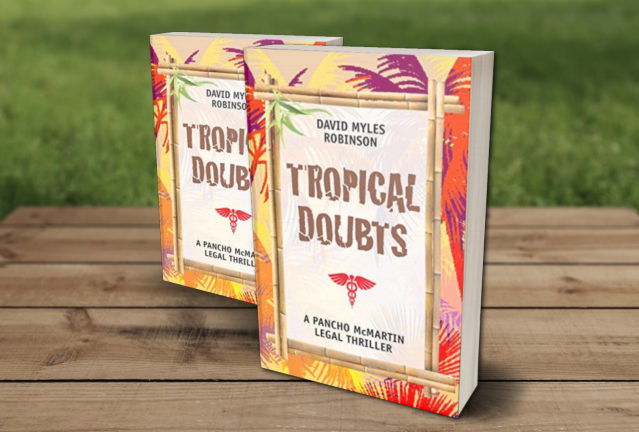 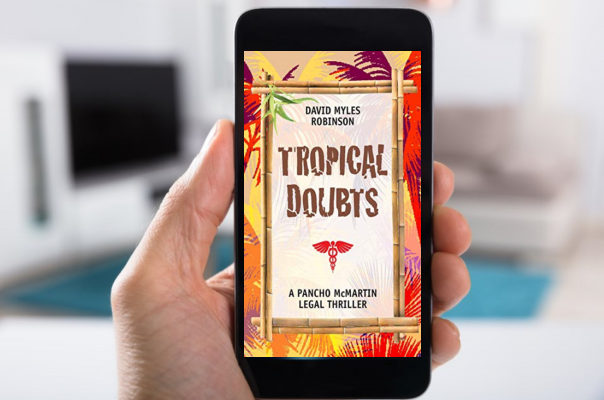 I first started writing short stories and poems when I was in the 7th grade. I worked on the school paper in high school and became the editor-in-chief. In college I took some creative writing classes and also worked as a staff reporter for a minority newspaper in Pasadena, CA. Once I became an attorney, I was too busy to devote too much time to writing, although I did complete a novel about 25 years ago. It wasn’t very good, although the plot was eventually the basis for my published novel, Tropical Lies. I’ve always loved writing, so it was a natural for me to write again as I began to wind down my law practice.

I have three published legal thrillers, all based in Honolulu with the same criminal defense protagonist. I like to try to intersperse those novels with non-legal related stories, which are in the suspense/thriller categories.

One of the most common pieces of advice beginning writers hear is “write what you know,” so legal thrillers was a natural for me. My first published novel, however, was a golf-related suspense novel, Unplayable Lie, which was also a natural as golf is one of my passions.

I tend not to wax poetic when I’m writing, so I leave the true literary achievements to those who have a gift for that. Perhaps it’s my legal training, but I tend to be a very linear thinker, which is good for just telling a plain ol’ good story.

After searching for an agent for my first novel, I eventually began to make submissions to small publishing houses. A boutique traditional publisher in Florida agreed to read my manuscript, loved it, and published it.

First and foremost, I want them to be engaged in the story and characters. Beyond that, my goals are generally modest. There is almost always something to learn from legal thrillers, whether it is learning more about America’s judicial system or about the individuals on both sides of the law. One of my novels, The Pinochet Plot, is unabashedly political, but is also a fun and exciting story.

It is always rewarding to complete a novel, but of course the most rewarding thing is for a particular novel to be enjoyed by the readers.

Thinking of and then fleshing out a story line. Once I have a good idea about that, the writing is fairly easy for me.

Avail yourself of the many excellent books about writing fiction; read books in your intended genre; and then just write and keep writing.

I’m very eclectic in my tastes, although once I began writing suspense novels I tend to read more in that genre so as to keep learning. But I will often go back to the classics like Dostoyevsky, Hemingway, and Vonnegut.

I was a trial attorney in Honolulu for 38 years. I met my wife, Marcia, in law school in San Francisco and we moved to Hawaii to be close to my ailing mother. Marcia ultimately became a trial judge in Honolulu. We now live in Taos, NM where we can enjoy golfing, skiing, hiking, and long road trips. We have travelled to all seven continents and I have a published travel memoir, Conga Line on the Amazon, which relates some of our great travel adventures.

My website is davidmylesrobinson.com which I try to keep updated as to current works. I also write intermittent blogs at the site. My Facebook author page is David Myles Robinson. Please feel free to contact me directly through the website or my author email: david@davidmylesrobinson.com

Thank you so much for taking the time to interview me. 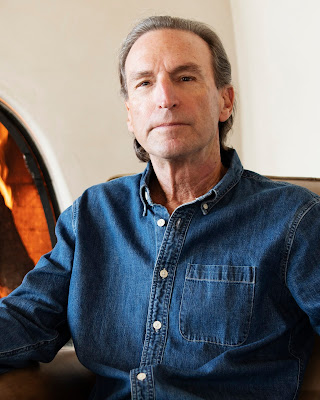 David Myles Robinson was a trial attorney in Honolulu, HI for 38
years before retiring to the mountains of New Mexico, where he lives
with his wife, a former Honolulu trial judge. In the days of yore,
before becoming a lawyer, he was a freelance journalist and a staff
reporter for a minority newspaper in Pasadena, CA. He is an
award-winning author of six novels, three of which are Pancho McMartin
legal thrillers set in Honolulu.Having traveled to all seven continents, he has also published a
travel memoir entitled CONGA LINE ON THE AMAZON, which includes two
Solas Traveler’s Tales award winners.He says he includes his middle name, Myles, in his authorial
appellation because there are far too many other David Robinson’s
running around.