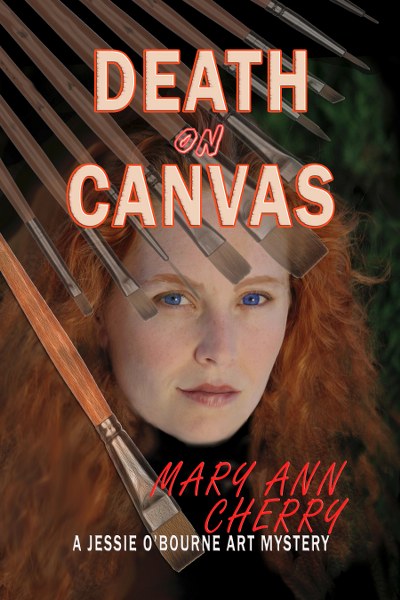 While painting on location in one of her family’s hayfields, Jessie absentmindedly brushes a note of turquoise onto the canvas. Curious about what added the lovely spot of color, the artist walks over to discover a tennis shoe. The mate is still on the foot of a dying Native American girl crammed between the hay bales.
The story becomes more personal when old flame, Sheriff Russell Bonham, reveals that Amber Reynolds, a grad student writing a thesis for her art history major, was attacked while on her way to speak to Jessie’s family about two missing Thomas Moran masterpieces worth millions. The paintings disappeared nearly a hundred years ago from St. Benedict’s Mission School. Right after the unsolved murder of Jessie’s great aunt Kate.
Goodreads * Amazon 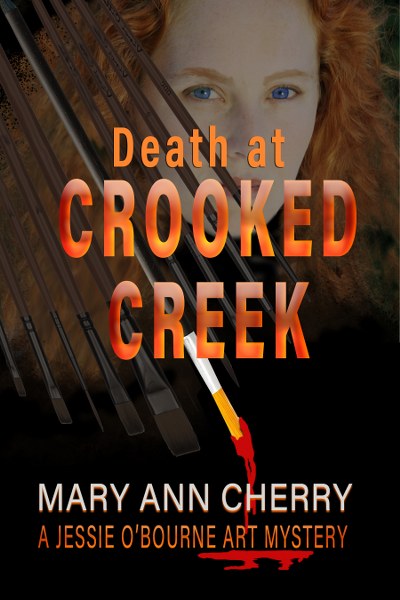 The massive tractor draped with the advertising banner struck prominent artist, Jessie O’Bourne, as a fun way to promote Montana’s annual Crooked Creek Art Expo—until she noticed the bullet holes in the back window. Then she heard of the tragic shooting death of a local teen. After her irascible tomcat, Jack, discovers a dead man in Jessie’s motorhome, she not only becomes a murder suspect, but begins receiving threatening notes accompanied by a toy replica of the big John Deere.
Surrounded by talented painters and sculptors, Jessie suspects one is a creative killer.
Goodreads * Amazon

IT ISN’T JUST ABOUT THE VERB

My short talk is about adding excitement to your writing, not about the difference between active and passive verbs. To use active words instead of passive, you must first know the difference. so even though most of you are old hands at it, I’ll give a short explanation.

Recognizing passive voice takes attentiveness. The biggest giveaway is some form of the to be verb in a verb phrase. The “to be” verbs are essential in writing. But with overuse, they can also be an enemy of the novelist or short story author.

In active voice, the subject performs an action such as: My grandma knitted this scarf. Or…the storm demolished the building. Or better yet, get some action going:  The scarf twisted under grandma’s knitting needles, growing and stretching like the bean stalk in that old fairy tale.

Phew. That’s done. Now let’s talk about how to use words to activate scenes, characters and descriptions that don’t bore the reader. Active writing isn’t just about the verb. It’s about engaging the reader. So when I talk about active words, I am talking about words that elevate a story from the mundane to the exciting—or at least to the interesting. Choices between boring and exciting can be as basic as what your character is eating or drinking. Words should be paint a picture in your reader’s mind. They should bring taste, smell, and color. When you are writing fiction and have a choice between active and passive verbs think physical. Think “show don’t tell”. It helps to start with the basic sentence and then reevaluate the words.

Okay, there you have the basic. Now, think physical. Think Aloha moment…that which is different will always stand out…

She lifted the mug to sip.  Now give the CIDER a personality – “The amber cider burnt an angry path down her throat like flowing lava.”

The steam, the heat, the smell, the burnt tongue all bring the reader into the moment. It’s about engaging the reader. Active words overhaul a boring story the way exercise shapes and sculpts a flabby body.

Does it have to be verbs that make a story seem to rumble with action? It is certainly better to use verbs that show action instead of the boring passive verbs. However, I have found those can be overdone easily as well.  To augment those words that move, that suffocate, that rejoice, use words that entertain—that DO something to the reader’s experience.

When someone picks up a book, they want to be entertained. They want to be sucked into the story until they become part of it. They want your hero or heroine’s life to become their alternate reality, if only for a short time.

What makes that happen?

Let’s talk people. Fabricate a character readers love, or a character that readers love to hate without making them look in the mirror so often, or have their ex-wife tell about what a jerk they are. Instead, do most of it with—and I’ll repeat it–action!

DESCRIBING YOUR CHARACTER: Description of the character doesn’t have to be dull. A description can be active, and inanimate objects can be given life.

If you want more drama, then think more physical. The freckles are alive, but give them something to do.

Character traits: You can describe your character’s personality the same way, but usually it is better to give examples of what the character does to SHOW true character rather than describe it.

LOVE SCENES – of course passion should be active. At least one hopes.

DESCRIPTION – How about scenic descriptions? They can be active as well.

Tumbleweeds rolled across the dry ground and settled against the fence like waves rolling in from a brown ocean. The clay soil crunched and cracked under Jason’s feet.

Instead of “The sky was cloudy grey ”  anthropomorphize… The wind grew in strength and the oppressive grey clouds trembled like goose-bumpy teens slipping into a haunted house.

FEELINGS AND MENTAL ACTIVITIES are not exempt from action…from page 132 of WRITING the THRILLER by T. Macdonald Skillman…

“…Comprehension swept away denial, eroding her self-control, allowing the fragmented thoughts swirling about her to tumble out.”

She stood slightly bent, the broken thoughts swirling about her weakened body like the serpent hair of Medusa. She put her hands to her pale face and heard a feral muttering, realizing the sound burbled from her own mouth. The truth will out.

ANTHROPOMORPHIZE: How does the “humanizing” of inanimate objects, the sky, a kitchen table, a random thought or a tumble of nut brown hair make your writing more exciting and active? Readers spend their days sitting, watching, listening. They yearn for something exciting to do but either haven’t the time, the money or the inclination. The elderly live sedentary lives. The ill are bed-ridden. The activity of words used in extraordinary ways pulls them into the story and gives them an experience. It doesn’t have to be monumental—just different from hum-drum. The story doesn’t have to be outlandish. It just needs to be told in a manner that gives the couch potato a sense of something happening. Let them experience movement and delicious description vicariously.

Colors can be active. The correct color gives personality and mood in a scene. We all know this but seldom think about it.

Which one brings a love scene to life?

Example one: Her billowy dress was low-cut and in his favorite color—a pale, baby’s breath pink (makes you think right away of babies and diapers, doesn’t it?)

EMOTIONS have color. You may hear “red-hot anger” – you never hear “pink anger”. Any shade of color that would have white added to it, pink, pale lavender, light blue, denote weaker emotions. The primary colors vibrate in your writing. Make sure you use them in ways that are appropriate. Use variations such as crimson for red, ultramarine for blue, etc.

COLORS—especially in a scene: Think about things you like to do and places you like to travel Each one should have a color that comes to mind. We seldom think about that but it part of the way our world works. Morning starts with white bread that becomes brown toast or a blackened charcoal slab fed to the birds.

Color affects mood in our daily life and will do so in the book. A grey drizzly day, a happy sunshine-filled blue sky, etc. Make yourself set the stage. Color can do that in a similar manner of the active verb without having to elaborate. But when you join both together they rock!  Noun that has some latent action will help…

A shimmer of pale-blue draperies –where are we? A bedroom? A B&B?
A blast of Navy-blue – are we at a military parade?
Green –we can’t think green without thinking “nature” and grass OR envy, depending on the scene
A riot of yellow sunflowers – we can almost see them waving in the breeze
How about an explosion of crimson? – we immediately think blood

Colors that sound like food or include food activate two senses—vision and taste—without the reader even realizing it: Nut-brown, candy-apple red, caramel, coffee-colored, creamy white and so on…

Again, let color be active by humanizing the tint or shade and making it DO something…

Black erupted across his vision…
Sea-green rushed in, hammering the beach with wave after wave…

COLOR SENSE: Excerpts from How Color Affects Our Mood by Rachel Bender
“…There are several reasons why colors influence how we feel. …There are social or culture levels as well as personal relationships with particular colors,” explains Leslie Harrington, executive director of The Color Association of The United States, which forecasts color trends. …You react to color.”

PASSIVE VERBS –  The forms of the verb “to be” 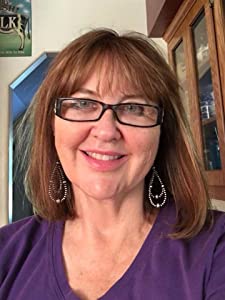 Cherry is a professional artist who writes the Jessie O’Bourne art mystery series in her elusive free time. Like her main character, she paints primarily western and wildlife subject matter, travels to art shows, and teaches workshops.
Raised in rural Montana, she now lives in Idaho with her husband and several spoiled cats.
Website * Facebook * Twitter * Bookbub * Amazon * Goodreads